We recently invested in new test tool add-on for our WiFi Testing Service that greatly expands the wireless testing capabilities regarding performance, throughput, and quality of experience testing. The upgrade comes from OctoScope1​ which adds onto our existing two box-26 (semi-anechoic chamber) stack. The original system was used to gather data for Range Vs. Throughput testing by passing traffic through attenuation (noise in dB increments) to simulate distance using a QuadAttenuator module along with the first generation multipath emulator. With that, a vendor could see how their wireless device performed over time with increased attenuation (noise in dB increments) in both the 2.4GHz and 5GHz bands.

Now I’ll go into more detail about the new equipment and what it is capable of. The 2 box-26 stack now sits on top of a second generation multipath emulator (MPE2) and Box-38 chamber (a larger semi-anechoic chamber with more capabilities than the box-26). The MPE2 is a fader which uses patented technology2 to emulate indoor multipath in the RF domain which keeps the signal path wide-band and bi-directional. This adds a more realistic environment by emulating multipath reflections and has its built-in QuadAttenuator module used for range testing.

The addition of the Box-38 chamber gives our Wireless Testing the ability to test Throughput Vs. Orientation, which utilizes a turntable that can rotate devices under test 360 degrees while gathering throughput data. The MPE2 and Box-38 are shown in Diagram 1 below. The Diagram also shows the new PAL-2 as well as two added QuadAttenuator modules. This opens a way to attenuate multiple devices at once which allows for roaming and client steering tests to be possible. These modules are accompanied by the iGen Interference Generator and additional High gain Mimo antenna arrays which are also new additions to this system. 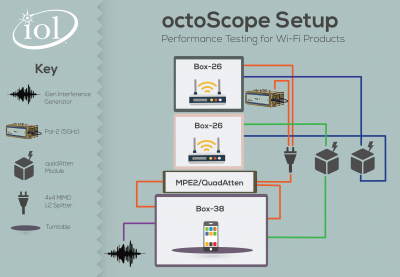 The PAL-2 (5GHz) is the one most notable modules added which can function as a fully configurable Access Point (AP) and/or can simulate 32 virtual station clients (vSTAs) that can be used for tests such as client load balancing. This module also allows QoE testing on vendor devices with clients joining/leaving the network, band steering, data rates, channel adaptation, etc. The Pal-2 and can also be a tool to monitor RSSI, MCS, streams, channel width, guard interval, and more during a test.

Having the 3 box solution opens an opportunity to better test mesh network environments along with having the ability to test multiple mesh vendor devices at once while utilizing separate QuadAttenuators. With this new equipment, tests such as roaming capabilities between a station and multiple mesh AP’s can now be completed. This can be done by simultaneously increasing the attenuation of traffic from one mesh AP while decreasing the attenuation on a separate mesh AP which forces an endpoint to reconnect using failover.

The addition of the iGen module gives the ability to introduce many different waveforms (BLE, microwave, etc.) to observe how a vendor device behaves with various kinds of radio interference. This module can generate interference in addition to using the MPE2 to further simulate a real-life home environment while testing. With an upgraded OctoBox and the many different ways that it can be physically configured, it opens a lot of innovative ways for the Wireless consortium to gather more using various environments for performance and throughput data. Currently we are developing new testing for the upcoming months. Please check the wireless testing services page for more information!