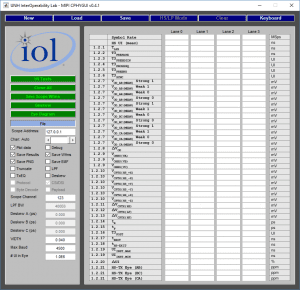 QualiPhyer is a family of software packages used to test a product’s conformance to IEEE 802.3™ and MIPI Alliance electrical and optical standards for Ethernet and MIPI devices. These packages can be used to control oscilloscopes and traffic generators over Ethernet or GPIB connections to test the physical layer characteristics of devices. The software processes waveforms from the scopes to produce results based on algorithms developed at the UNH-IOL.

QualiPhyer C-PHY GUI and D-PHY GUI are designed to test MIPI devices against the C-PHY v1.0 and the D-PHY v1.2 versions of the MIPI Alliance C-PHY and D-PHY CTS. These packages can be used to perform D-PHY or C-PHY HS-TX and LP-TX conformance tests.  Test results can easily be viewed within the tool GUI’s and exported to various formats. Measurement plots may be additionally exported to PNG or EMF (vector format).

The 100BASE-TX and 1000BASE-T packages for QualiPhyer are designed to test an Ethernet PHY against Clause 25 and Clause 40 of the IEEE 802.3 Ethernet standard. The 100BASE-TX package allows users to test the transmitter and receiver of their 100BASE-TX capable devices for differential output voltage, rise/fall time, duty cycle distortion, jitter, return loss, open circuit inductance, clock frequency, adaptive equalization, baseline wander correction, and BER verification. The 1000BASE-T package allows users to test the transmitter of their 1000BASE-T capable devices for voltage template conformance, return loss, jitter, distortion, clock frequency, and common-mode output voltage. Results can be viewed in the GUI and they can also be exported to a CSV or HTML file for access outside of the tool. Figures are saved whenever possible for later viewing inside or outside of the tool.