The adoption of Ethernet standards in automobiles will allow car manufacturers to reduce costs and increase bandwidth through cost-effective components and fewer cabling. We offer a wide range of extensively detailed test suites designed for your Automotive Ethernet Devices including Automotive Development Platforms, Bridges, HeadNode, Sensors and Infotainment Systems. We are also an OPEN Alliance approved test laboratory

We have several testing groups that are directly related to Automotive Ethernet testing including IEEE 1588, Avnu Automotive Certification testing and our Automotive Networking Test Services. Interested companies are encouraged to become members in these groups as well to ensure maximal coverage for Automotive devices.

Please contact us to help guide you to the best solution for your need! 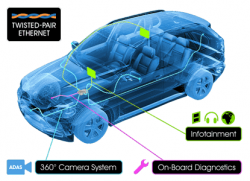