Throughout the HighTech Bound program, interns work with IOL staff and students on projects created and designed to fit their assigned testing group. At the end of the program, students present the projects they worked on over the course of the program to their friends and family. Below are projects worked on during the 2022 summer. For a full recap check out this video on our YouTube page. 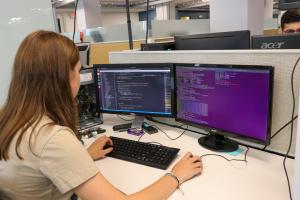 Carley and Willis were tasked with rebuilding a Java-based test tool, IOL INTERACT while using Python. They worked with the software development team to create PC Edition 17.0b. This test tool is used by customers worldwide to test NVMe SSD devices. At the beginning of the project they started with a base window function and continuously added new features to create the final product. These new features included M/FYI case selection buttons for each test suite, reorganized log directory, links copied to clipboard, three specified log deletion buttons, and more. During the duration of this project they were able to experience how a software company operates and what the typical day could possibly look like for a programmer. We were excited to continue working with Carley as a test technician year-round at the lab! 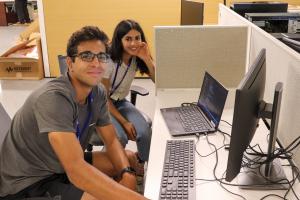 Aditya and Pavana worked with the IP testing group, which runs the IOL INTACT software tool, to create a web application that enhances the management of purchased licenses of IOL INTACT. This internal tool replaces an existing spreadsheet and adds additional functionality including, filtering the data based on criteria, sorting licenses by company, and overall greater convenience. This application that they worked on also has a more intuitive graphical user interface. During this project, Aditya and Pavana were able to become more comfortable and fluent with Vue.js, Quasar, GraphQL, and Apollo GraphQL.

Leah and Ryan were tasked with creating CnC validation tests in the EmBase working group. This project was completed within Violett, an existing IOL test tool that provides automated protocol conformance testing for vendors in the Time Sensitive Networking, Physical Layer, and Precision Time Protocol spaces. These vendor devices require administrative control during testing, which can be automated via the use of a Command and Control (CnC) endpoint. CnC validation testing ensures the correct functionality and integrity of these automation endpoints, drastically increasing the speed and autonomy of certification testing. Leah and Ryan created a suite of CnC validation tests as well as a virtual endpoint to execute their tests on. The virtual endpoint receives the requests from the CnC validation tests, applies any configuration changes, and then sends the appropriate response back to Violett. Through their time here they were able to learn how to use a RESTful web framework to implement custom netcode, how clients and servers interact with one another in a testing environment, and how embedded systems can be commanded and controlled using industry devices. 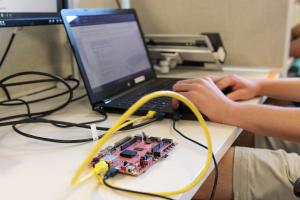 Jacob, Ohm, and Bram, our largest group of interns and also aspiring Electrical Engineering undergrads, worked in the EmBase testing group. They were tasked with creating a test tool that can write arbitrary data to communicate and test with 100 Mb/s ethernet devices. This project involved making an FPGA (Field-Programmable Gate Array) and software design that interacts with the 4B5B ethernet PHY to do signaling and allow transmission of valid and invalid data so that they could then test what that device does under certain circumstances. Through their experience at the IOL they were able to become familiar with GIT, soldering, Verilog, Python, and more.