Packet aggregation is the idea of creating packet fragmentation which reduces time on a busy WM and makes error recovery much easier. 802.11e was the first standard to outline a different form of packet aggregation known as A-MPDU (Aggregated MAC Protocol Data Unit). MPDU is what we know as an 802.11 packet, making A-MPDU per packet aggregation.

This aggregation deals with the idea of reducing the DIFS (Distributed Interframe Spacing) between frames to a SIFS (Short Interframe Spacing) and condensing the CW (contention window of a traffic stream to a single point in time). This is accomplished with the use of a BA (Block Acknowledgement). In 802.11, each packet transmitted, receives an Acknowledgement frame in response to let the transmitting device that the packet was received without error. Between each frame and an acknowledgement is a SIFS which is followed by the DIFS to ensure that time for retransmission is given. A-MPDU eliminated the need to acknowledge every packet; instead a data stream receives a BA at the end of the stream that is a packet containing the acknowledgement for all packets. This means that the WM is used more efficiently because less time is spent idle. It reduces the retransmission time of multiple packets into one and removes the time waiting for acknowledgements.

802.11n outlined a second form of aggregation known as A-MSDU (Aggregated MAC Service Data Unit). MSDU is a clever name for the payload of a packet, so A-MSDU is a packet containing the payload of several packets. This is designed to help reduce the time taken up on the WM by traffic streams making easier for clients to have access to the WM and make the WM less idle.

A-MSDU is a good idea, but in practice it does not quite meet up to A-MPDU in creating a more efficient WM. A-MSDU can cause more problems, because the very thing that makes it so useful is also a hindrance. Since the packets are so big, their transmit time is longer than most packets, meaning that it is more prone to error. If an error occurs, it will be costly to send a retransmission. A-MSDU is a good idea and works in practice but does not work well in tandem with other WLANs in the area.

In practice, A-MPDU significantly increases the efficiency of the WM. Throughput on a WM with A-MPDU enabled is far higher. 802.11ac has now made this form of aggregation mandatory so WM will become much more efficient. This will make WLANs much more reliable. 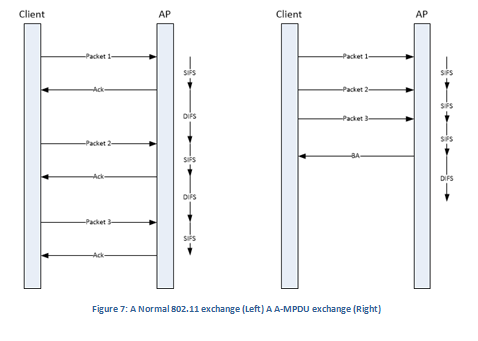 Wireless may have started out unreliable, slow, and unsecure, but it has come a long way since then. Now there are new standards that boast up to 7Gbps and new protocols to make wireless not only reliable, but able to use the WM effectively. The technologies listed above are the significant enhancements in 802.11, but there are many more that also help the WM become dependable.