Modulation schemes have not changed much in 802.11, since the early days we used OFDM (Orthogonal Frequency Division Multiplexing). 802.11b was really the only notable 802.11 PHY (physical layer) standard that did not use OFDM but then again it did only get 11Mbps using DSSS (Direct-Sequence Spread Spectra). OFDM is the primary modulation suite used for today’s technology. This is because of the super extensible QAM (Quadrature Amplitude Modulation) with BPSK (Binary Phase Shift Keying), and QPSK (Quadrature Phase Shift Keying) handling the simpler modulation.

BPSK only accommodates for two constellations meaning it can only transmit one bit per burst, making it an extremely slow modulation. Even so, BPSK is the most reliable of the three modulation schemes because it is difficult to get a large EVM on a spectrum with only two points to reach. Another proof point behind BSK reliability is that the constellation positions are multidirectional, which means they can be in either plane.

QAM is a fully extensible modulation scheme; this means it can have any number of constellations. 802.11n defined the use 16-QAM and 64-QAM, giving it much higher rates. 802.11ac defines the use of 256-QAM. QAM offers a huge increase of speed over the other two modulation schemes. The aim of QAM is to create a way to easily split the spectrum up into more constellations for higher bit rate for each subcarrier. The risk associated with these higher rates is that it creates a greater chance for a transmission to have high enough EVM to not achieve its ideal constellation. This is because an increase in the number of constellations reduces the space between them, leaving fewer margins for error. This makes QAM the fastest and most unreliable of the modulation schemes.

While QAM may seem unreliable, it works well in environments with low and high SNR. This is because the modulation scheme has such fast rates that it overcomes the unreliability. Since most 802.11 channels (at least in the 5GHz band) have quite high SNR, the reward of QAM far outweighs the risk. Take Away OFDM is a dependable modulation scheme that uses the three modulation technologies to create a WLAN that is not only reliable but fast, using the spectrum to its full potential.

Coding rates helps make modulation more reliable because they create extra error checking bits that make it so packets are received correctly. The idea is to create a number of coded bits per data bits. This process ensures that transmissions reach their target and that the data is correct. 802.11 uses ½ as the default coding rate which says for every one bit there is one coded bit. The standards also outline several more coding rates such as 3/4 or 5/6. These coding rates will actually reduce the number of error checking bits significantly. This means that if an error occurs, there aren’t as many error checking bits to check against. Coding rates can significantly increase data rates because more data bits are transmitted than coded bits. This can affect WLANs reliability but mechanisms such as MCS index help greatly. Because of mechanisms like MCS though, higher coding rates can be viable making for faster WM where high SNR exists. 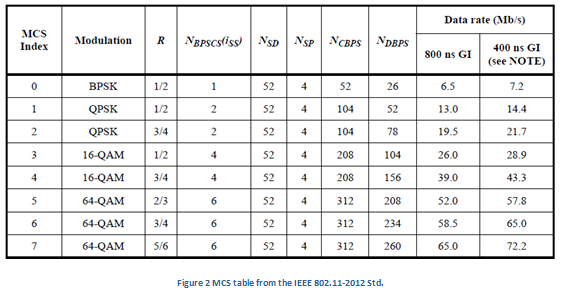 As shown above, QPSK has 2 MCS values to merge with increased error from the lower coding rate.

Since the WM can degrade over distance or with the presence of a low SNR, error checking must be increased. Since QAM splits the spectra into small pieces called constellations that can be closely clustered (See Figure 1 for more information), the EVM can be much larger before the ideal constellation is no longer being hit. While in BPSK, only two constellations exist, so it is much easier to hit a target making that rate much easier to achieve than 16-QAM (See Figure 6 for a better comparison). Also by increasing the coding rate, the transmission becomes more reliable and less prone to error. This means that access is still readily available to the WM at the cost of high rates.

802.11g introduced the idea of having MIMO (Multiple Input Multiple Output). This is the idea of using spatial multiplexing in combination with multiple wireless radios. The signals from these radios is multiplexed together and transmitted to a receiving device with the same number of radios. The signals are then de-multiplexed on the other side and transformed into multiple transmissions. This allows a device to send multiple spatial streams (SS) to another device with the same number of SS.

802.11n was the standard that really took the idea and made it work. It outlined the operation of 4 SS that boasted 600 Mbps. Not only does it increase rates, it also increases the range for each rate. This is accomplished by using the signal bounce of multipath. This is because the radios can receive multiple streams at once, allowing the bouncing signals to reach and still be deciphered.

MIMO is the initial step to making wireless much faster and more reliable because a device has multiple radios to transmit and receive with.

Legacy wireless ranges from 60ft to 210ft in OFDM depending on the rate. Current wireless technology, however, may see up to 250ft indoors for any rate. This is because the legacy technologies did not use signal bouncing to increase their range. In fact, the signal bounce actually messed with transmissions. Since newer technologies use the bounce, the range is drastically increased. With the onset of technologies like beamforming comes another 50ft increase in range. The only new wireless technology with a range problem is 802.11ad. The 60GHz wavelength is not strong enough to penetrate solid objects, which limits it to one room. There are also many emerging long range wireless standards to create WRAN (Wireless Regional Area Networks) which estimates a range of 1km. Additionally, there are technologies like 802.11s; Mesh networking, which routes traffic within a MSS (Mesh Service Set) which is a network of Meshed 802.11 nodes. This network will route traffic from clients connected to one node to another as if it was connected to all AP is the MSS. This means APs can be chained over a distance to create a long range network.