Droves of eager engineers looking to learn a thing or two about the new spin on a classic technology congregated below the light blue banner waving overhead of the NBASE-T Alliance booth. When asked by a novice who could benefit from NBASE-T technology, the easy answer was anyone at the Interop ITX event. WIFI was particularly slower than usual, possibly from the bottleneck caused by everyone simultaneously trying to tweet about the amazing next generation BASE-T demo. The added bandwidth would have facilitated instantaneous internet access. 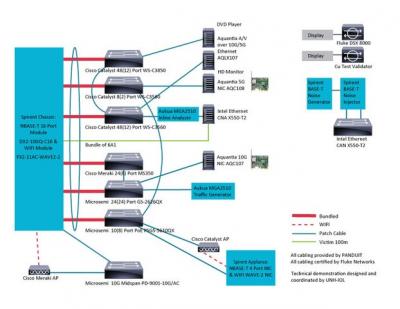 In true Interop(erability) spirit, 10 companies spanning the enterprise and small/medium business ecosystem created a fully functional network highlighting many of the key NBASE-T benefits right on the show floor. This interoperability between several NBASE-T enabled products included enterprise network equipment, consumer market and test and measurement (T&M) equipment. Specifically, we highlighted wireless access points (APs), switches, and client devices; consumer market devices including digital media players and smart TVs; and T&M solutions. All products were connected via Cat5e, Cat6 and Cat6a cables in lengths extending up to 100m, and a worst case 6-Around-1 bundle configuration demonstrated network connectivity in the most stressful of traffic conditions. Engineers from these different companies came together to educate the wide knowledgebase found in the Interop ITX crowd on the advantages and defining characteristics of NBASE-T technology. The demonstration included:

This demonstration showed that a broad range of devices from different companies can coexist simply by plugging them in. 5Gb/s was achieved over both Cat5e and Cat6 cabling at varying lengths from under a meter to 100m.

NBASE-T technology supports all Power over Ethernet (PoE) standards, facilitating its use as a replacement for existing 1 Gbps networks and making it ideal for greenfield deployments. PoE is fundamental in enterprise deployments, as well as large-building infrastructures, such as airports, shopping malls and stadiums. In this demo, a 2.5Gb/s link was achieved on a wireless AP that was powered with a PoE midspan, eliminating the need to plug the AP into a power outlet for use.

NBASE-T technology is designed to work over the worst case model of 6 cables bundled tightly around a center victim cable. The noise associated with the coupling of the 6 surrounding cables can induce large amounts of crosstalk; combined with the insertion loss of 100 meters of cable, users can still expect up to 5Gb/s performance under these conditions over the commonly installed Cat5e cabling.

The typical applications often involve noisy environments, so it is important to make sure products can survive and adapt. What sets the NBASE-T specification apart from other standards is the NBASE-T Downshift capabilities of the PHYs, which selects and automatically adjusts for the maximum achievable sustained speed on installed cabling. In this demo, a device was looped back to itself through a variable noise channel, which systematically ramped up the applied noise in order to reduce the signal to noise ratio of a 5GBASE-T link low enough for it to downshift to 2.5GBASE-T, and then 1GBASE-T. Before NBASE-T Downshift, a 10GBASE-T link would quickly drop down to 1000BASE-T or drop the link all together.

This demo showed the consumer applications, in which a movie was being played over the network. A Blu-Ray player was connected to a TV through two NBASE-T switches and displayed no latency, opening up applications for an interconnected home to stream videos, PC gaming and NAS.

A key to any successful technology, NBASE-T is also supported by test & measurement equipment vendors to ensure adherence to every nook and cranny of the specification. This demo had analyzers in between the links, traffic generators stressing switches, port validators and noise injectors to fully verify the network was running in tip-top shape.

The demonstration of NBASE-T Alliance at work at Interop ITX showed a multitude of ways to upgrade any network, whether it is in the enterprise or home network space, or anywhere in between. Planning the topology was almost as fun as flexing my badminton muscles at the Interop block party. Initial discussions over features participating members of the NBASE-T Alliance wanted to demonstrate evolved into a spider web of traffic generators, switches, end points and cabling. Since each product did not support the same speeds or capabilities, the network was designed to maximize the amount of unique pairings of devices that could work together while still incorporating the features determined from the beginning. The jungle vine network of connections on paper cleaned up into several different point to point connections with a switch in between, covering every combination of vendor-to-vendor interoperability. Each connection had its own subnet to keep management straightforward. The procedure is always relatively simple, the execution can sometimes be another story. Luckily, this technology is mature and robust so there weren’t any major issues and the interoperability went off without a hitch; very typical of an IOL plugfest with the added bonus of a trip to Las Vegas. Interop ITX flew by faster than a 40GBASE-T test mode 2, but the NBASE-T demo showed this technology will have a large impact on a wide variety of networks for a long time coming.

I would like to thank all the engineers and companies that participated in the demonstration: