The system consists of a Xilinx development board with custom Hardware Descriptive Language (HDL) which is controlled via software and a graphical user interface created at the IOL using LabVIEW. The BitPhyer 10G system is used for testing conformance of:

Like the other traffic generators in the lab, the BitPhyer 10G allows us to send many different types and sizes of frames to DUTs and create specific patterns of frames. The BitPhyer 10G also gives us the ability to transmit and receive individual arbitrary 66-bit codes, trigger the logic analyzer on specific 64b/66b block types, toggle the scrambler and descrambler, as well as send and receive jitter test patterns.

The BitPhyer 10G is very handy for testing the receiver's ability to handle incorrectly encoded bit streams. An example of this can be found in the Clause 4 MAC test suite, where there are certain tests which require sending fragments, runt frames, frames with preamble or length errors, and other patterns that cannot be created with other traffic generator. One specific example is Test #4.1.2a, which requires the testing station to transmit a runt frame to the DUT that ranges from 5 to 63 bytes in length. The COTS tools that are used for a large portion of the Clause 4 testing can only create frames as small as 46 bytes in length, but the BitPhyer 10G can easily generate frames down to 5 bytes. The BitPhyer 10G also allows us to test a DUT’s ability to receive variable preamble by reducing the amount of preamble that follows the Start Frame Delimiter.

Clause 46 and 49 conformance testing is performed entirely with the BitPhyer 10G system. The tests in these test suites require finer control over the individual 64b/66b blocks than is possible with other traffic generators including generating specific pattern of ordered sets (Local and Remote Faults) or sending blocks with specific control codes or block types. For these tests it is also necessary to gather detailed information about the responses the DUT sends back to the test station during testing. 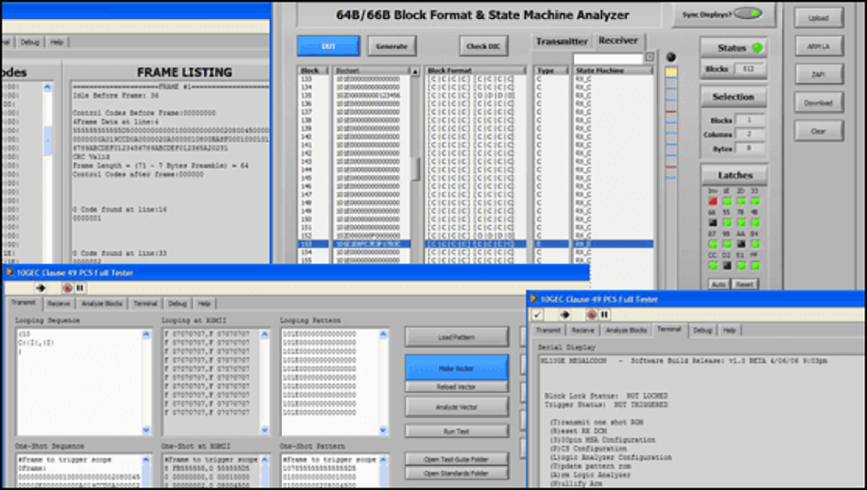 The ability to edit test vectors at the block level is extremely important for much of the testing done in the 10 Gigabit Ethernet Consortium. Without this level of control, much of the testing we do wouldn’t be possible or would require complex test setups including oscilloscopes, arbitrary waveform generators (AWGs), and logic analyzers. Data captured on the BitPhyer 10G provides a more detailed level of information than what is available through most other commercially available traffic generators allowing for quick reporting of highly detailed test results.